Strengthening supply chain resilience has become an increasingly important task for the global community following recent developments such as the coronavirus pandemic, which arose around the end of 2019, and the Russian invasion of Ukraine in February 2022. For Japan, supply chain issues center on the need to secure stable supplies of strategically important materials including microchips, rare-earth elements, automotive batteries, minerals, and medical supplies. The key to bolstering supply chains, especially in the case of such strategically important materials, lies in logistics. As of 2020, maritime transport accounts for as much as 99.6% of Japan’s exports and imports on a tonnage basis.[i] Thus, developments in maritime shipping are of direct concern to the nation’s economic security.

Since September 2014, China has expanded its maritime influence under a national strategy of becoming a “strong maritime power.” (haiyangqiangguo) As part of this maritime expansion, China has made striking progress in building container shipping networks and in increasing control over overseas ports. Yet, this issue has yet to attract a level of attention commensurate with the scale of its importance. To address the paucity of literature, the present article traces China’s maritime expansion using data related to maritime transport, size of merchant fleets, and marine terminal operations. The article further reveals that China has bolstered its maritime presence amidst the pandemic.

Looking at the number of containers handled by ports in the world, we can see China’s rapid progress. The growth in container traffic becomes clearer once we compare the top 30 busiest ports in 1980 with the same in 2020 (see Table 1). In 1980, eight of the 30 busiest marine terminals were in the USA, while there were none in China. In contrast, in 2020, only three of the top 30 busiest ports were American, while as many as 10 were Chinese ports. Moreover, Chinese ports accounted for seven of the top 10 spots: Shanghai was the busiest port, Ningbo was third, Shenzhen fourth, Guangzhou fifth, Qingdao sixth, Tianjin eighth, and Hong Kong ninth.[iv] Shanghai has continually held the top spot since overtaking Singapore in 2010, and other Chinese ports are steadily growing busier year by year.[v] 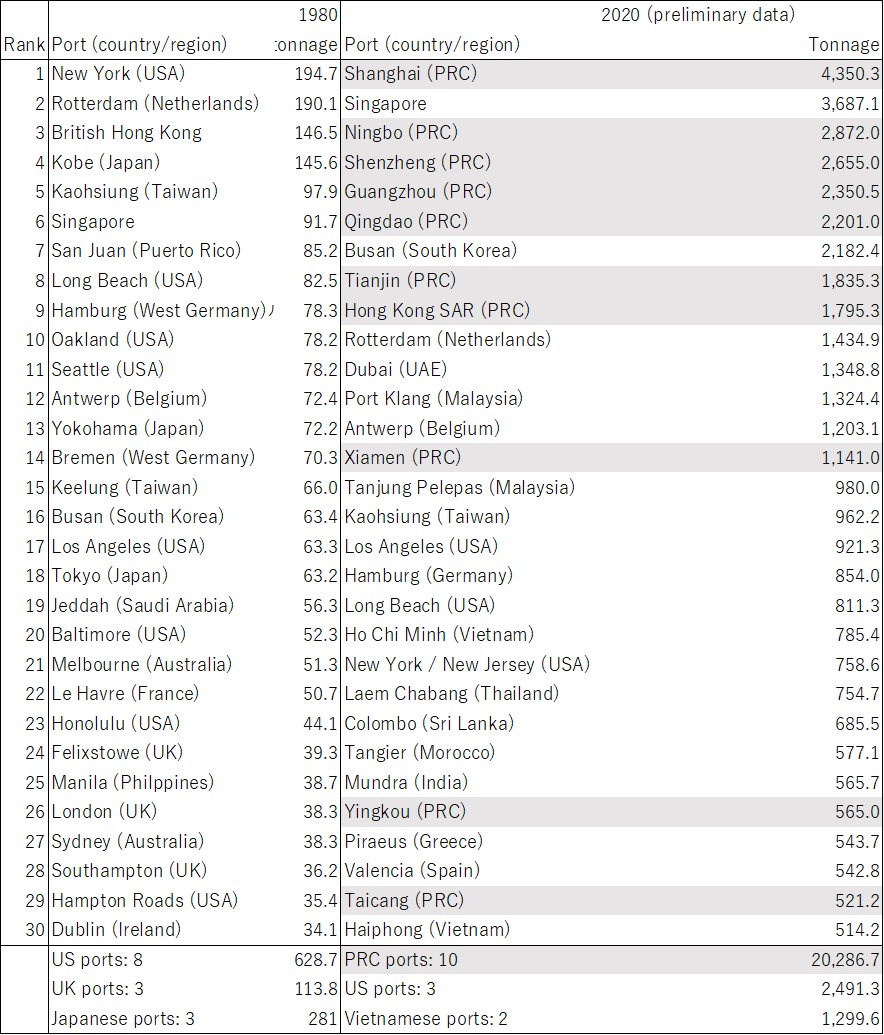 Based on data from the Ministry of Land, Infrastructure, Transport and Tourism, and from the Ports & Harbours Association of Japan

China is also growing its merchant fleet, as revealed by data on the world’s largest fleets by owner nationalities. In 2020, the world merchant fleet had gross tonnage of 1.43 billion. Of this, Mainland China (excluding Hong Kong) was the seventh largest ship-owning country with 62.0 million gross tons (GT), accounting for 4.3% of the world total. Hong Kong was the fourth largest with 128.9 million GT, accounting for 9.0% of the world figure. When their shipping registries are combined, Mainland China and Hong Kong accounted for 13.3% of world shipping with 190.9 million GT. In comparison, Panama was the world’s largest ship-owning nation with 226.4 million GT (15.8% of the world total), and Liberia came in second at 187.5 million GT (13.1%). Thus, when the Hong Kong Shipping Register is included, Chinese shipping occupies the number 2 spot, exceeding Liberia-registered shipping.[vi]

The China-registered merchant fleet has shown notable growth in recent years. In 2017, Mainland China was the eighth largest in the world with gross tonnage of 48.5 million (3.8% of the world total), denoting that it grew by 27.9% between 2017 and 2020. In the same year, Hong Kong had the fourth largest ship registry with 113.4 million GT (8.8% of world shipping), a percentage increase of 13.7% over the same period.[vii]

Chinese companies are also making inroads into marine terminal operations. The operation of ports around the world is an oligopolistic market dominated by a handful of large, multinational port companies known as global terminal operators (GTOs). The five main GTOs account for an overwhelming amount of container traffic (see Table 2).[xi] The GTO that boasts the highest volume of container traffic is COSCO Shipping Ports (CP Ports), which is part of the China Ocean Shipping Company, a major state-owned shipping company in China. CP Ports has held the top spot since 2016, having been in fourth place in 2015.[xii]

Another one of the top five is Hutchison Port Holdings (HPH), a dedicated terminal operator based in Hong Kong. Then there is China Merchants Port Holdings (CM Ports), a terminal operator that operates under the umbrella of the China Merchants Group Limited, a conglomerate that deals in transportation, finance, and real-estate in China. CM Ports came in at seventh place in 2019, but its container volume has grown year by year. As these data illustrate, Chinese companies are increasing their presence in port management.

In recent years, China has made its presence increasingly felt in maritime shipping in terms of container traffic, marine vessels, and marine terminal operations, all of which play a vital role in supply chain management. This maritime expansion has continued even amidst the coronavirus pandemic. For most states, maritime transport constitutes the linchpin of logistics, and ports and harbors constitute strategic infrastructure. A rising share attributable to a particular country or company does not in itself present a direct security threat. Given that the maritime shipping industry can be used as a tool for economic statecraft, however, it is necessary to closely monitor developments in this industry from a strategic perspective. It is also important to build an international consensus against the misuse of oceans as such a tool.