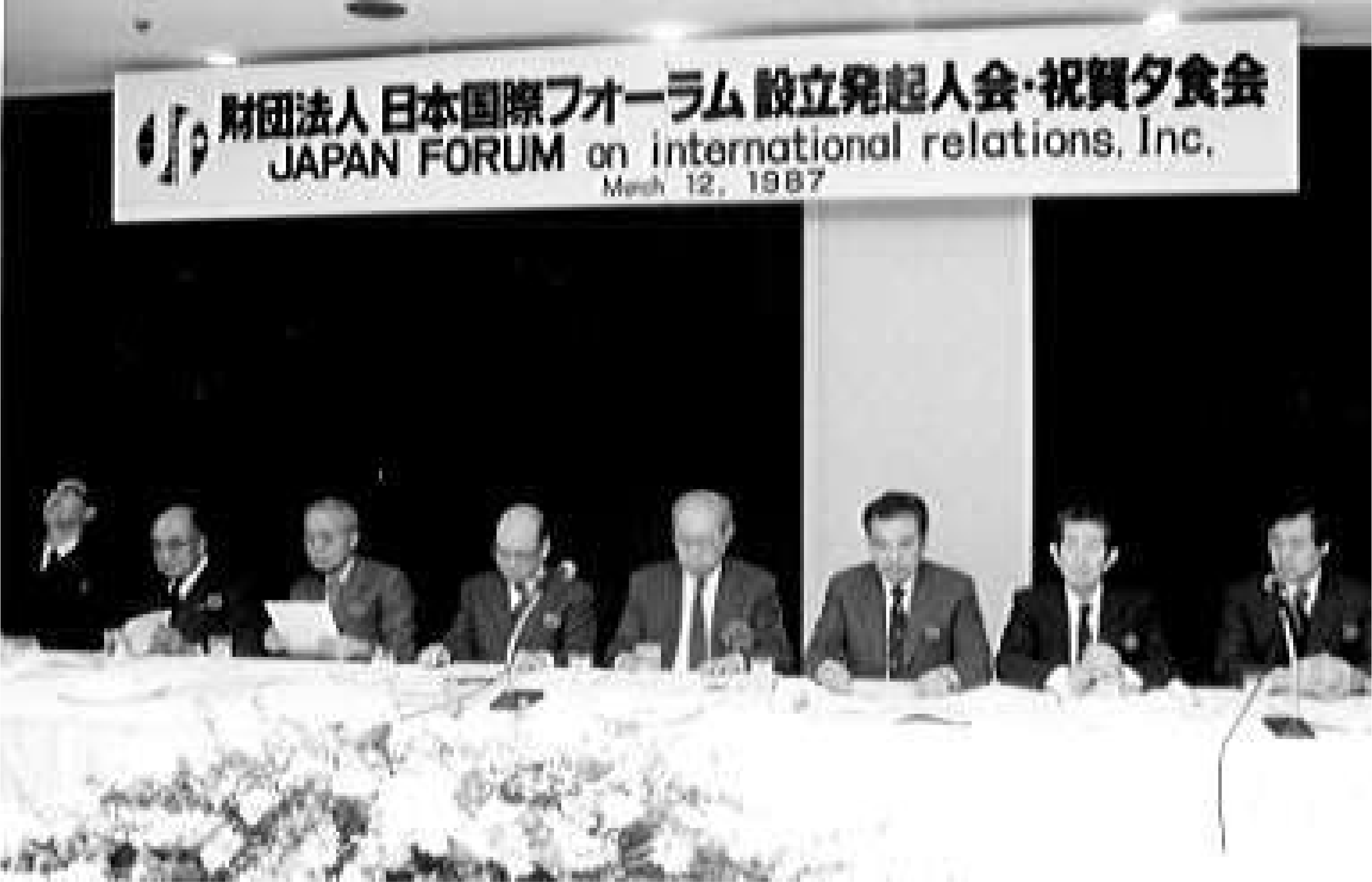 Inaugural Dinner of the JFIR attended by Dr. Okita Saburo(fourth form right).
Mr. Hattori Ichiro (third from right) and 61 other promoters and 39 guests on March 12, 1987 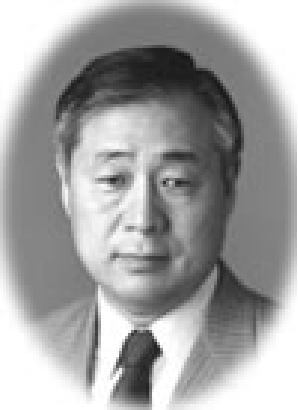 As we celebrate the 10th anniversary of the Japan Forum on International Relations (JFIR), the first thing that strikes me is a fresh rediscovery that the Forum has not only survived but prospered to date. The Forum, of course, owes this success to its members and all others concerned who have generously supported its activities during those ten years. At the same time, I cannot but admit that I now come across more frequently than before such questions as what was the original cause and circumstances which drove the founders to work for the establishment of the Forum. It is understandable that the lapse of time has made our memory more and more dim. Therefore, it may be appropriate for me, on this occasion of the 10th anniversary of the Forum, to try to cultivate our memory of the days when the founders worked for the establishment of the Forum.

The Forum was founded on March 12, 1987 in Tokyo on the private initiative of Dr. Okita Saburo, former Foreign Minister of Japan, Mr. Hattori Ichiro, then President of Seiko Epson Corporation, and 61 other independent citizens from academic, business, political and mass media circles of Japan. At this founding meeting of the promoters of the Forum, Dr. Okita was elected the first Chairman of the Forum, Mr. Hattori the first President and myself the first Vice President. Foreign Minister Kuranari Tadashi was present as one of the invited guests for the occasion and delivered a congratulatory speech expressing his hope that the Forum develops itself as a forum where the foreign policy of Japan is most seriously disccussed. 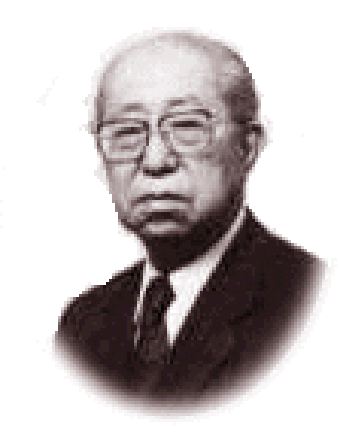 The incorporation of the Forum was registered at the Ministry of Foreign Affairs on April 28, 1987. It was a concurrence by a sheer chance that exactly one year ago, namely on April 28, 1986, the concept of the Forum was first discussed between Dr. Okita Saburo and myself. As then I had a chance to work both as a Tokyo Representative of the Center for Strategic and International Studies (CSIS) based in Washington and as an Executive Director of the Japan Chapter of the Quadrangular Forum (QF) based in Tokyo, Washington, Brussel and Ottawa, I had come to entertain an idea that a private, non-profit, independent foreign policy thinktank which is common in North America and Europe must be established in Japan as well. In Japan there were certainly some, but they were not completely independent from the government. I feared that the absence of foreign policy thinktanks which are really independent from the government might jeopardize Japan's voice and influence in the international community.

Dr. Okita fully supported this concept of mine and promised to do whatever he can for the establishment of such a thinktank in Japan. In addition to the concept of "private, non-profit, independent, "one more concept was also agreed upon between us. In our view, this thinktank should not be an institution where only scholars and specialists assemble. We decided to make this thinktank a membership organization where people from such different circles as academic, business, political and mass media voluntarily assemble to discuss among themselves issues of international and diplomatic importance. Hence the name of our organization was made to carry the word "Forum".

Accordingly, as we decided to include people from business circles as well among our membership, it became imperative for the original core promoters to include someone from the business circle. The first name that came to my mind was that of Mr. Hattori Ichiro, whom I had known very well. I visited him on May 14, 1986. My original financial plan for the incorporation of the Forum was based on my assumption that not only annual membership fees, both corporate and individual, but also the initial endowment be shared by multiple donors, both corporate and individual. Therefore, I could not believe myself when I heard Mr. Hattori saying as follows. After hearing my explanation for about thirty minutes, he said, "It would make the incorporation very difficult to ask prospective participants for the contribution of not only his or her annual membership fee but for his or her share of endowment. Let me as an individual contribute all the required endowment of 200 million yen. I fully agree with you and only hope that you will fulfill your idea." Three of us, Okita, Hattori and myself, met for the first time to discuss this issue on June 13, 1986. We decided to organize a Committee for the Establishment of JFIR. My personal office was designated to act as a Secretariate for the Committee. In view of the fact that the success or failure of our efforts to found JFIR financially depended on how many corporations would agree to subscribe one million yen for a unit of annual corporate membership fee, we were of the same opinion that we need men of influence in the business circle to join our Committee. Thus we proceeded to enroll in the Committee Mr. Takeda Yutaka, then President of Nippon Steel Corporation, Dr. Toyoda Shoichiro, then President of Toyota Motor Corporation, Mr. Nasu Shoh, then President of Tokyo Electric Power Company, Mr. Mizukami Kenya, then Vice-President of The Yomiuri Shimbun, etc. Though I cannot refer here to all other names, which deserve our appreciation, it was thanks to all of them that we could successfully hold the founding meeting of the promoters of the Forum on March 12, 1987 in Tokyo.