Large seaweeds (hereinafter “macroalgae”) are attracting increasing international attention as potential blue carbon[1] habitats that can contribute to climate change mitigation. At the same time, they are also expected to be utilized as a new resource for bioenergy, new materials, drug development, and other applications. With development of large-scale aquaculture in offshore areas combined with offshore wind power generation expected over the next few decades, I will briefly summarize the necessary institutional framework of science, policy, and industrial utilization related to macroalgae in the international community, as well as the key points for promoting social implementation.

Macroalgae are multicellular marine plants that can be easily observed with the naked eye. Unlike seagrasses such as eelgrass, which have leaves, roots, and stems and reproduce via seed germination, macroalgae do not have distinct roots, stem, or leaf structure, but rather adhere to rocks and reproduce by releasing spores. Macroalgae are divided into eukaryotic algae such as red algae (nori or genus Pyropia), green algae (genus Ulva and Codium fragile), and brown algae (kombu and wakame) and prokaryotic cyanobacteria. Macroalgae are different from microalgae such as phytoplankton, which are visible only under a microscope.

In East Asia, including Japan, China, and Korea, macroalgae have long been a part of the cuisine and culture. Macroalgae appear in the Taiho Ritsuryo (701), Nihon Shoki (720), and Manyoshu (759), and cultivation techniques have been established for nori, kelp, and wakame; thus, with roots in Japan’s history, they have flourished in Japanese culture (especially, the food culture). However, the situation is different in the West, where macroalgae have been regarded as a “sea’s weed” and have historically been abhorred. This is said to be largely due to the influence of the Greeks and Romans, who birthed much of the Western culture[2]. As per Greek mythology, the sea god Pontus and sea goddess Thalassa, who had macroalgae for hair, are believed to have lured sailors to their deaths[3]. This legend is said to be behind the aversion to macroalgae in the Western culture. However, this Western perception of macroalgae has undergone a dramatic change in recent years.

3. Environmental value of macroalgae and challenges

Since the 2010s, microalgae’s environmental value—for example, climate change mitigation, nutritional supply for humans and livestock, discovery of new medicine, alleviation of inequality, and biodiversity conservation—has attracted increasing attention internationally. Krause-Jensen and Duarte (2016)[4] estimated that 11% of the net primary production of macroalgae is sequestered in the deep sea at depths greater than 1,000 m. It has been pointed out that this estimate is comparable to the amount of carbon sequestered in coastal habitats of angiosperms (seagrass beds, mangrove forests, and salt marshes)[5].

Worldwide, macroalgae production has expanded rapidly since 2000, mostly due to the increase in macroalgae farming (Figure 1). East and Southeast Asia account for most of the production, with particularly large-scale production in China and Indonesia. While reports of production in Europe and North America are limited, macroalgae farming is receiving increasing attention, to facilitate its promotion and monitoring for developing a climate- and environmentally friendly bioeconomy. Agar, alginate, and carrageenan, which are extracted from macroalgae, are widely used as thickeners, gelling agents, and additives in food and pharmaceutical products. Various other uses are also being considered and implemented, such as macroalgae in fish feed for aquaculture and as livestock feed and agricultural fertilizer.

Figure 1: Global macroalgae production. Prepared by the author based on a FAO (Food and Agriculture Organization of the United Nations) report (2020)[6]

I would like to present some notable examples of macroalgae use in land-based activities. Macroalgae have been used for centuries to improve agricultural soils and promote plant growth[7]—their components promote seed germination and root development; enhance freeze, drought, and salt tolerance; increase nutrient absorption; and control phytopathogenic fungi, insects, and other pests. Macroalgae also absorb nutrients such as nitrogen and phosphorus that move from land to coastal waters, and their use as fertilizer and for other purposes serves to return these nutrients to land. In Japan in the 1950s, in the Cape Erimo area, where the land had been devastated and fishery production had decreased, macroalgae were used to prevent sand from flying and drought after seeds were sown to promote herbaceous growth, leading to the promotion of greening[8]. As a result, production of fishery and macroalgae, which had been in decline, recovered[9]. Macroalgae are also used as feed for livestock, and recent studies have shown that mixing 2% of a type of red algae (Asparagopsis taxiformis) in feed can reduce methane emissions from ruminants such as cattle by up to 99%[10]. A study showed that feeding livestock the underutilized macroalga (Sargassum macrocarpum C. Agardh, a type of brown algae) strengthened immunity in pigs and enriched the yolk in eggs laid by hens[11], while in another, feeding cows a type of brown algae activated their intestinal immune system[12].

Efforts are also underway to convert macroalgae that wash up on beaches into biofuel and fertilizer. In the Atlantic Ocean, including West Africa and the Gulf of Mexico, Sargassum (Sargassum natans and S. fluitans), a floating brown alga, is proliferating and washing up on beaches along the Caribbean and Mexican coasts, adversely affecting tourism, fishing, and coastal ecosystems[13]. A higher nutrient supply from the Amazon River and increased upwelling due to changes in the marine environment along the west coast of Africa have been suggested as causes of the macroalgal blooms. In the United Kingdom, research is underway to convert these macroalgae into fuel and fertilizer by using acidic and basic catalysts to extract sugars as an energy- and cost-saving method that, unlike conventional ones, does not require washing and drying with freshwater[14].

It has also been pointed out that marine-based biofuels may be less harmful to the environment than land-based ones. On land, forests must be cleared to make fields to grow plants for biofuels; furthermore, converting food crops into biofuels will lead to higher crop prices. It has therefore been pointed out that it is desirable to promote the use of macroalgae as a biofuel while taking care not to interfere with their use as food.

Macroalgae are also important for marine biodiversity. Kelps, which account for about 40% of macroalgae cultivation, play a crucial role as eco-engineers. Their function as cradles for juvenile fishes is particularly important. Macroalgae cultivation can also help keep the natural macroalgae intact, thus preserving the habitat. Cultured macroalgae serve as a countermeasure against eutrophication, removing nitrogen and phosphorus from the water. However, excessive increase in macroalgae farming may lead to anoxia in the bottom layer. Plastics and ropes used in aquaculture may also increase marine debris. Competition for space, nutrients, and light with the original ecosystem of macroalgal beds, seagrass beds, and coral reefs should be noted, as should the introduction of exotic species, genetic disturbance, and the “green tide.”

Table 1 summarizes the environmental value and benefits of abovementioned macroalgae, as well as points to be noted and issues to be addressed in expanding the scale of macroalgae cultivation.

Table 1. Environmental value of macroalgae, benefits, and points to be noted/issues to be addressed 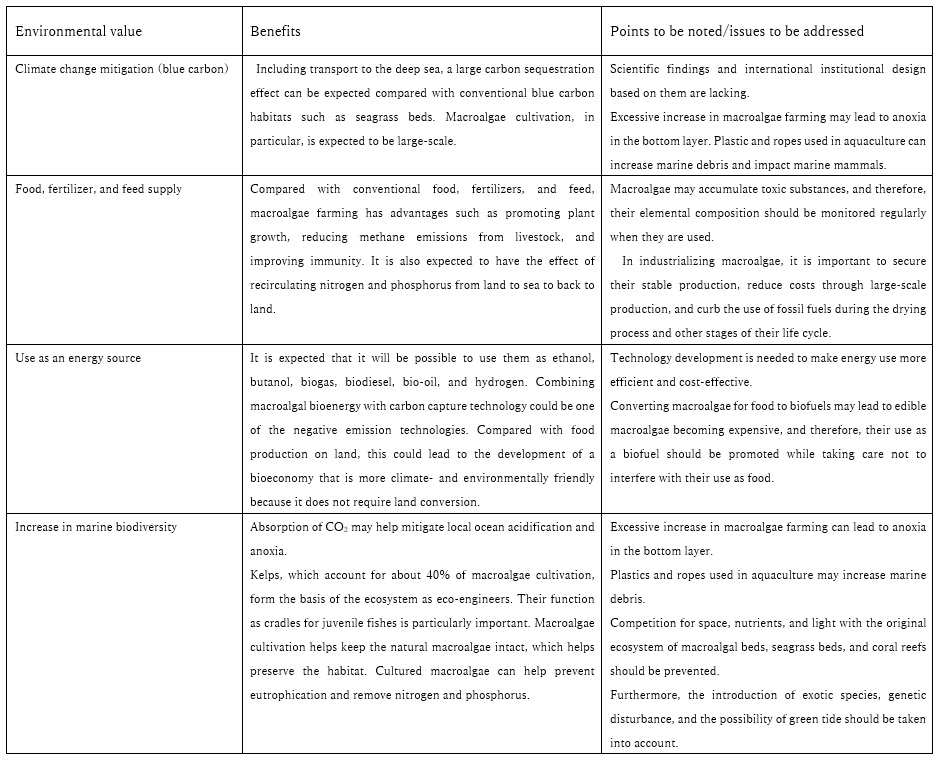 As mentioned above, macroalgae production has the potential to grow significantly in the future, due in part to the expectations for their environmental value. China is already the world’s largest macroalgae farming country, with large-scale cultivation of kelp (Saccharina japonica) and wakame (Undaria pinnatifida); however, current technology is still based on simple mechanisms and limited to a portion of the overall potential for aquaculture activities[15]. In China, in parallel with the accumulation of knowledge on the effects of climate change on these macroalgae, a direction is being explored to significantly expand 1) the area under cultivation through mechanization, 2) the development of new stress-resistant species, 3) integrated macroalgae and aquatic animal cultivation, and 4) the compatibility of offshore wind power and cultivation space.

Interest in macroalgae has also been growing in Europe in recent years: according to statistics compiled by the Food and Agriculture Organization of the United Nations (2020), Europe produces less than 1% of the world’s macroalgae. However, Norway, for example, has the highest production volume and number of producers in Europe, and the country is aiming to develop a bioeconomy through the promotion of research & development and industrialization using macroalgae[16]; in 2019, its government established the Norwegian Seaweed Biorefinery Platform, a five-year project aimed at creating a sustainable industry[17].

As global attention to macroalgae increases, rules and regulations will become more important for sharing their benefits and expanding their industrialization. To enhance the blue carbon function of macroalgae, it is necessary to officially recognize their sinks and emission reduction and encourage investment in macroalgae. It is desirable to promote the development of standards for measuring macroalgal carbon sequestration and to promote its carbon credits based on these standards. It is also noted that at the United Nations Framework Convention on Climate Change level, recognition of the role of macroalgae as a carbon sink and making it a part of discussions at future COPs (United Nations Climate Change Conferences) will be key[18].

In expanding industrialization, some have pointed out the need to introduce regulations and certification systems to create standards for food safety, production safety (including worker safety), and environmental safety (monitoring and reporting recommendations, etc.). A global partnership called the Safe Seaweed Coalition has also been established to promote the macroalgae industry[19]. Chinese researchers have highlighted the need for a broad platform to formally strengthen and support scientific collaboration to enhance the management, conservation, and safety (e.g., gene spills involving recombinant DNA) of natural and farmed kelp resources in China, Japan, Korea, and elsewhere, and have proposed the establishment of an East Asian Kelp Consortium[20]. Such global and regional rule-making may accelerate in the coming years.

In this paper, I have explained the environmental value of macroalgae and briefly reviewed global trends of the rules and regulations that will be necessary to maximize their value. Japan is the first country in the world to establish a carbon credit system for the increased absorption of CO2 through the conservation and restoration of macroalgal beds—social demonstrations of the system are underway[21]. In addition, the development of standards for measuring macroalgal carbon sequestration, including aquaculture, which is expected to become increasingly important internationally in the future, has been the subject of a five-year research project that began in 2020, along with the development of technology for the formation and expansion of seaweed beds, under the “Development of Carbon Sink Source Technology in Agriculture, Forestry, and Fisheries” project[22]. Based on the results of such researches, Japan is expected to promote the formulation of science-based international rules in the area of “macroalgal blue carbon.”

The above efforts notwithstanding, Japan should establish a domestic system that includes the national government, private companies, and fishers to promote industrialization, and be involved in discussions on the introduction of global regulations and certification systems, the establishment of regional organizations in East Asia, and the formulation of rules on a global platform, such as the Safe Seaweed Coalition. It is important that Japan actively contributes to the cultivation of a new public perception of marine resources via climate change countermeasures and sustainable use of the marine environment through macroalgae.