It is a well-known fact that Mitsui O.S.K. Lines, Ltd. (MOL) deploys three ice-breaking LNG tankers on the Northern Sea Route[i]. Can we say that this constitutes use of the Northern Sea Route by a Japanese company? And if this shows the presence of “Japan” in the Arctic, in what sense can we say so? The following is a discussion of this issue.

The transport contract that MOL won is a time charter contract for regular ice-breaking LNG tankers with Yamal LNG (a Russian company that develops, produces, and sells LNG) as the charterer and MOL as the shipowner. As it is a time charter contract, MOL is contractually obligated to provide the ships to the charterer by assigning a legal crew to the ships, maintaining the ships’ seaworthiness at all times, and ensuring that the ships are ready to sail according to the charterer’s voyage instructions at any time. In return for this service, the shipowner earns a profit by receiving chartering fees from the charterer, Yamal LNG.

Furthermore, in this transport contract, Yamal LNG, the Russian company exporting the LNG, is ultimately the charterer of the ships, and it directly (without going through MOL) gives voyage instructions (loading and unloading of cargo, navigation) to the ships concerned.

Thus, for example, suppose a Japanese electricity company or gas company purchases LNG from Yamal LNG (the purchase price of the LNG includes the transport cost), Yamal LNG loads the LNG on the ship at the Port of Sabetta based on the purchase agreement, and the ship carrying the LNG heads for Japan. Even in such a case, it is ultimately a voyage based on Yamal LNG’s voyage instructions.

3. How the ships are prepared

(1) Who is the registered shipowner?

For preparing ships, MOL established a foreign subsidiary for the purpose of ship ownership (only) as a 50-50 joint venture with China COSCO Shipping Corporation Limited (China COSCO SHIPPING Group).[ii1] Thus, MOL fulfills its contractual responsibility to provide ships to Yamal LNG, the charterer, by regularly chartering ships from the subsidiary. MOL, as the parent company, pays the appropriate time charter fee to the subsidiary, even though it is a subsidiary.

In relation to this project, MOL has won time charter contracts for the following four ships (Figure 1).[iii] 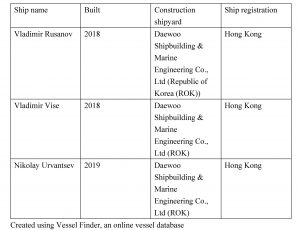 Since all of the ships are Hong Kong-flagged, the shipowner company established by MOL and China COSCO Shipping Corporation Limited (China COSCO SHIPPING Group) is a Hong Kong corporation. Nominally, this Hong Kong company orders ships from shipbuilding companies.[iv]

It is not unnatural for a Japanese shipping company to choose Hong Kong for its ship registration. This is because the shipowner and related parties (financial institutions and charterers) can benefit economically in two ways.[v]

First, it is a convenience for the financial institutions that provide financing for ship construction. As the ships are registered in Hong Kong, the mortgage[vi] on the ships as collateral by the financial institutions will be governed by the English law system, which is already rich in judicial precedents, giving financial institutions and maritime lawyers foresight, which is useful in practice. The second is for the convenience of the ship charterer, which serves as the ship manager (in this case, Yamal LNG). When a ship is chartered by a shipowner for a specific voyage, it is up to the charterer to decide which port(s) the ship will enter, but the charterer is responsible for the port costs (costs arising from entering a port) and fuel costs. This is similar to how a person who rents a car pays for the gasoline and highway tolls, while the car rental company does not.

Hong Kong-flagged ships receive the same handling as Chinese-flagged ships when they enter mainland Chinese ports, and are given preferential treatment in terms of port charges.[vii] A significant amount of the LNG produced by the Yamal LNG project will be shipped to China. It is economically advantageous for charterers to receive preferential port charges in mainland China. The choice of ship registration is a matter for the shipowner, but it is natural for the shipowner to consider the interests of the charterers.

By the way, the fact that the ships are owned by a 50-50 joint venture is in substance economically equivalent to the two shareholders of the joint venture sharing the ships on a 50-50 basis. Why do they do this? From MOL’s perspective, it can be assumed that it was to distribute the investment risk of purchasing expensive ships and to reduce cash flow burdens.

The reason for this is that these four ships have ice-breaking capacity of ice class Arc7, as defined by the Russian classification society, and are capable of breaking sea ice in winter. Therefore, they are expected to be double the price of a standard LNG tanker with the same transport capacity. Moreover, it is clear that these ships will not be competitive in terms of freight rates except in icy waters, meaning the Arctic Ocean. Having the ice-breaking capability means that the ships’ weight is heavier, and the fuel consumption is higher in order to achieve the same speed in normal waters. In short, it is investment in special ships that can only be used for the Arctic Ocean, and if the project had not gone well, it would be difficult to transfer the investment to other projects.

(2) The meaning of the ownership relationship of the ships

Therefore, the U.K. company is hiring the crew, manning the ships, and rigorously performing the maintenance and upkeep. If Japanese crew members employed by MOL are assigned to these three vessels, it is assumed that they will be seconded from MOL to MOL LNG Transport (Europe) Limited.

2) The burden of shipping costs

The shipowner subsidiary bears the “costs incurred by owning the ship” (“ship costs”). These ship costs include direct ship management costs (crew, repairs, dockage, lubricants, insurance, shipping supplies, and communication) and indirect ship costs (depreciation and interest). These ship costs are covered by time charter rates from one of the parent companies (MOL), and the profits and losses are split between the two shareholders (MOL and China COSCO Shipping Corporation Limited). Profits are split between the two shareholders and dividends will be paid.

Figure 2 shows a schematic diagram of the profit structure based on this relationship.

(3) Which shipyard built the ships?

It is the shipowner that orders the shipbuilding company to build the ships and is the main party to the construction contract. However, in many LNG development projects, it is not the shipowner but the project entity that selects the shipyard.

By the way, one of the circumstances for why Japanese shipyards have been unable to sign contracts for the construction of LNG carriers, except for those in which Japanese electric and gas companies are the charterers, is that the project entity of such LNG development projects, rather than the shipowners, now selects the shipyards.

One reason is that Japanese shipyards have a small production capacity and do not have the capability to build all of the large number of ships required by the project entity in a short period of time.[xii] A second reason is that Japanese shipyards, excluding a few exceptional shipyards, basically stick to the Moss-type tank shape for LNG tankers. However, charterers outside Japan prefer ships with Membrane-type tanks, because the port charges required to pay at each port for a ship is cheaper for a Membrane-type tanker even if the transport capacity is the same as a Moss-type tanker.

Economic rationality is also at work in the choice of shipbuilder companies.

This section will summarize the discussions thus far. For MOL’s allocation of three ice-breaking LNG tankers to the Northern Route, the following facts can be recognized or inferred.

Accordingly, the ships are not included in the Japanese merchant fleet because they are not operated and managed by a Japanese shipping company.

(2) The ships are registered in Hong Kong and the ships’ owner is a Hong Kong corporation. One of the shareholders of the Hong Kong corporation (50% stake) is a state-owned enterprise in mainland China. The other shareholder (50% share) is a Japanese company. Diplomatic protection rights over the ship are exercised by the mainland Chinese government, and administrative rights over the ship are exercised by the Hong Kong government. The choice of the ship registered in Hong Kong is based on economic rationality. The decision to own the ship as a joint venture with another company is also based on economic rationality.

(3) The ship management is carried out by a U.K. company. However, the ultimate parent company of this U.K. company is a Japanese company, which seen as meaning 100% control of capital.

(4) Crew members are assigned by the ship management company, which is the U.K. company mentioned in (2) above. It is not known whether the nationality of the crew is Japanese or not. However, MOL’s expertise and experience plays a major role for the education and training of the crew members.

(5) The transport of LNG to Japan by the ships involved will be realized as long as the Japanese electric and gas companies purchase LNG from Yamal LNG.

All of the above of (1) through (5) are based on economic rationality, and no politics can be found in them.

Thus, if we ask whether there is any room for the Government of Japan to be involved in such a project in the Arctic Ocean, the answer would be that there is almost none.

If that is the case, how does this project assess MOL as a Japanese private company, at least in the maritime community? There is no doubt that MOL has been given an extremely high prestige by the global maritime community. This is because the company has been operating safely in the icy waters of the Arctic Ocean, which are environmentally vulnerable. The people responsible for the safe operation are the crew members, who are employed by the ship management company. The ship-management company may be a U.K. corporation, but that is only for business convenience. In reality, its ship management capabilities have been cultivated by the maritime engineers and ship technicians of MOL itself. Moreover, MOL is one of only three companies in the world to have been awarded a charter contract for this project!

In terms of shaping the public opinion on maritime affairs in Japanese society, it would be beneficial, in my opinion, to present the actual situation of such companies’ dynamic activities in the world as a case study in legal and business education, in order to pique the interest of a wide range of students.