The effects of COVID-19

China’s Belt and Road Initiative (BRI) has been severely affected by the COVID-19 pandemic that began in 2020. According to statistics for 2020 from China’s Ministry of Commerce, 301,000 workers were dispatched to other countries as foreign labor service cooperation, which represents a decrease of 186,000 people or 38.2% from the previous year.[1] The fall of nearly 40% in the dispatch of Chinese workers has occurred against the background of global restrictions on cross-border movement due to the spread of COVID-19 infections.

Construction of traditional infrastructure projects that Chinese workers had carried out in countries along BRI routes, such as railways, roads, airports, seaports, and waterworks, was forced to be suspended.[2] Many of the workers who returned to China temporarily for the lunar new year holidays in late January 2020 found that they could not return to the construction sites due to restrictions on entry imposed by the countries where the sites were located. Furthermore, because the countries enacted emergency fiscal packages and placed priority on COVID-19 measures, financing to carry out the projects encountered difficulties.[3] 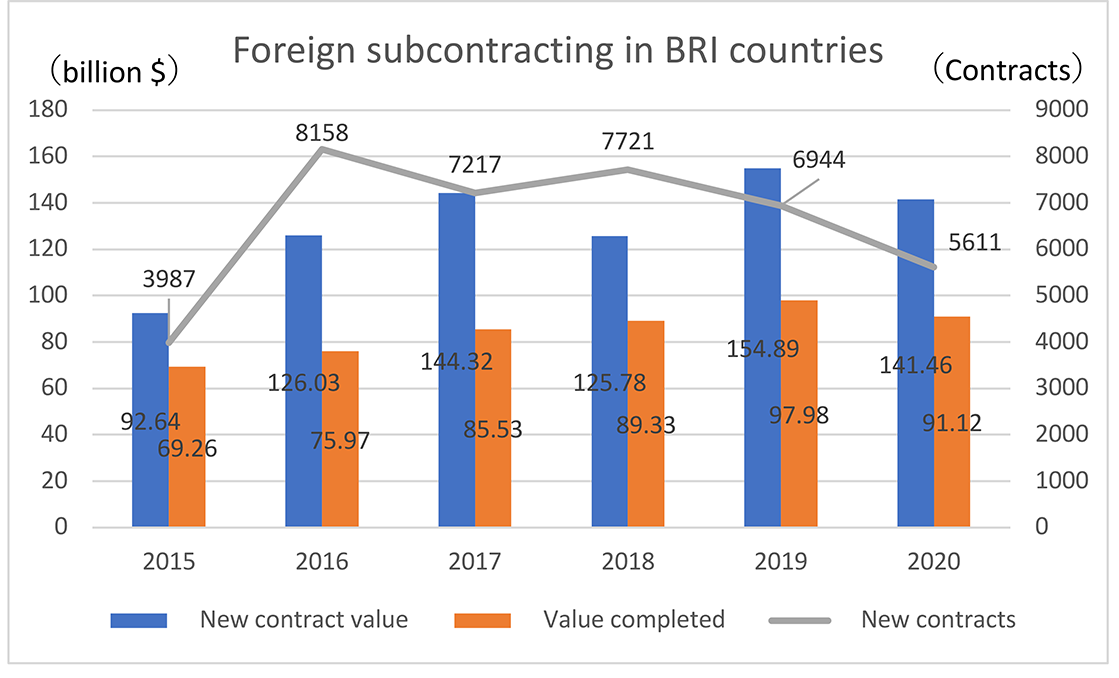 Source: Created by the author from Chinese Ministry of Commerce statistical data

The importance of Southeast Asia

Despite the effects of the spread of COVID-19 infections, China continues to regard the countries of Southeast Asia as important. The Ministry of Commerce publishes China’s key investment destinations among the BRI route countries each year,[8] but most are countries in Southeast Asia, a trend that has continued in 2020.

In 2020, developed countries’ perceptions of China generally worsened. The Pew Research Center in the United States conducts an annual survey on major countries’ attitudes toward China. According to its August 2020 survey of Australia, the United Kingdom, Sweden, the Netherlands, Germany, the United States, South Korea, Spain, France, Canada, Italy, Japan, Belgium, and Denmark, the proportion of people who regarded China negatively increased compared to 2019 in every country except Belgium and Denmark, for which there was no data from the previous year. Furthermore, this proportion was the highest it had been in the past 20 years in the majority of countries.[9] 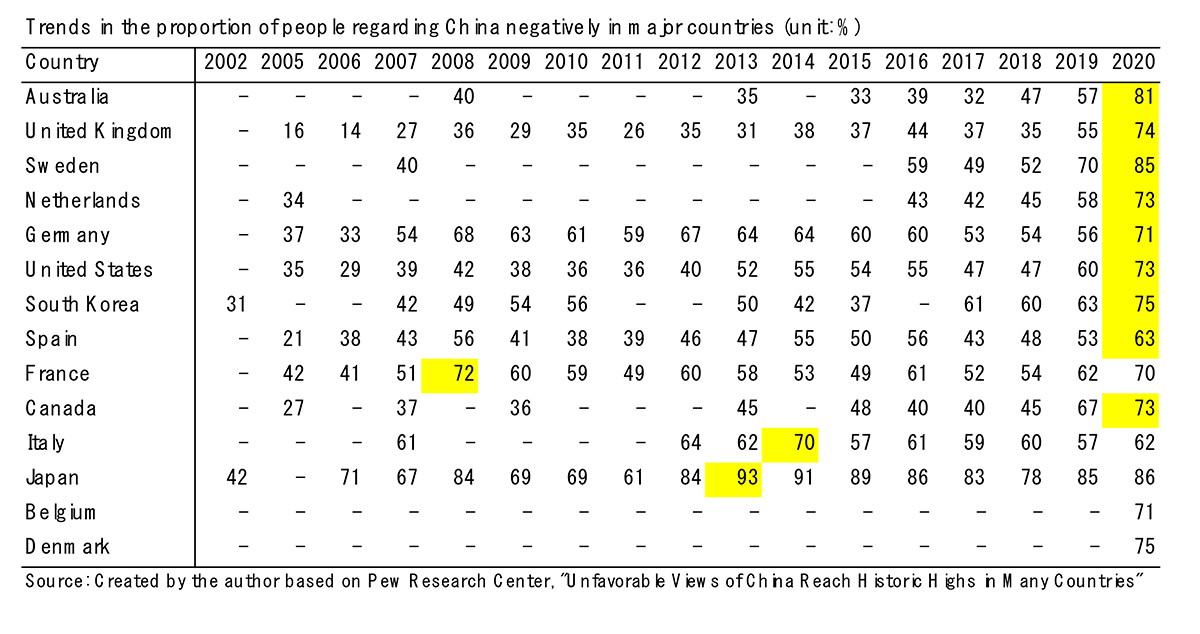 However, some developing countries had improved views of China. The ASEAN Studies Center at the ISEAS-Yusof Ishak Institute in Singapore conducts an annual survey of people involved in academia, business and finance, government, civil society, NGOs, and the media, and regional and international organizations in the 10 ASEAN member states. According to the results of the latest survey, published in February 2021,[10] over 70% of responses from ASEAN as a whole regarded the expansion of China’s economic influence with concern, which remains largely unchanged from the previous year. However, views on China’s economic influence have changed significantly over the past year in Laos, Cambodia, and Singapore.[11]

First, in 2021, Malaysia, Brunei, Indonesia, and Singapore have a higher proportion of people who welcome the expansion of China’s economic influence than the average in ASEAN as a whole. As noted above, the three countries other than Brunei have been key destinations for Chinese investment in the BRI since 2015, with Singapore in particular receiving greater investment.

Behind the change in Laos and Cambodia’s attitudes toward China is its rapid dispatch of medical teams and donations of supplies when the two countries were dealing with expanding COVID-19 infections. China supplied over 2,000 COVID-19 test kits to Laos in March 2020 and dispatched a 12-person medical teamin early April. The Jack Ma Foundation also donated 5,000 sets of protective gear and testing kits and several hundred thousand masks.[12] In addition, China donated the Sinopharm vaccine in February 2021.[13]

The relationship between China and Cambodia has also strengthened substantially in the past year. Prime Minister Hun Sen deliberately visited Beijing in early February 2020, when COVID-19 infections were serious in China, and expressed his support for China. President Xi Jinping lauded Prime Minister Hun Sen, saying, “A friend in need is a friend indeed.” Cambodia then continued to accept Chinese tourists until the end of February. On March 23, China provided medical support to Cambodia first among the countries of Southeast Asia.[14]

In addition, in July 2020, China and Cambodia reached a compromise in negotiations for a free-trade agreement (FTA). The two countries began negotiations in late 2019 and achieved an outcome in just half a year. Cambodia enjoyed the benefits of an “everything but arms (EBA) agreement,” which is a preferential system allowing tariff-free exports of products other than arms, from 2001 and expanded its exports into the European Union by about tenfold. However, Cambodia exiled its opposition leader and pursued the opposition party to the point of dissolution, which triggered a decision by the EU in February 2020 to suspend the EBA agreement as of August and to impose sanctions on garments, travel items, sugar, and other goods.[15] The FTA with China has special meaning because it replaces the EBA agreement and is the first bilateral FTA that Cambodia has concluded.[16]

Laos and Cambodia are currently success stories where the spread of COVID-19 has been halted in its early stages. As of March 20, 2021, Laos had merely 49 cases of COVID-19 infection and no deaths.[17] Cambodia had 1,578 infected persons and two deaths.[18] Clearly, China’s provision of support for COVID-19 countermeasures at an early stage has contributed to the improved image of China in the two countries.

China’s relationships with developed countries have largely deteriorated with the spread of COVID-19. By contrast, several countries along BRI routes, notably Laos and Cambodia in Southeast Asia,have greatly improved their perception of China. If the global economic slowdown due to the COVID-19 pandemic continues into the long term, the countries benefiting from Chinese investment will regard maintaining a good relationship with China even more importantly, as in Singapore, Indonesia, and Malaysia. Therefore, it is necessary to continue following how relationships between China and Southeast Asian countries develop in a “post-COVID” world.