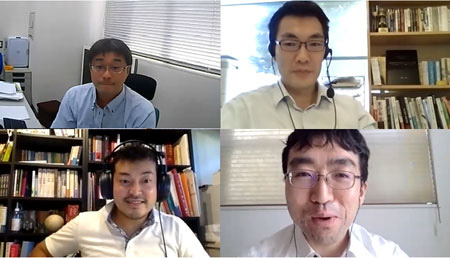 JFIR has conducted a research project “Trilateral Cooperation during & after COVID-19 Pandemic” as part of the “Japan’s Diplomatic Strategy in the Age of ‘Multilayer Globalism.'” The report of the project was published on September 4, 2020.

“CJK FTA Prospects and Challenges, and the Formation of the Digital Economy,” MIURA Hideyuki / PDF

“Trilateral Cooperation: Countermeasures Deployed by CJK Countries During and After the COVID-19 Pandemic,” KUMAKURA Jun / PDF

“Challenges for Trilateral Security Cooperation and the Way Ahead,” YATSUZUKA Masaaki / PDF

The trilateral framework of Japan, China and Korea began as the leaders of the three countries have gathered for the first time for breakfast meeting alongside the ASEAN Plus Three (APT) Summit in 1999. Among Japan, China and Korea, there are more than 70 trilateral inter-governmental frameworks have been institutionalized —including 21 minister level meetings, senior officials’ (SOM), and Director-Generals’ (DGM)— and practical cooperation in fields such as of the environment, economy and trade, agriculture, education, nuclear energy, or disaster management were consulted under such frameworks.

At the 8th Trilateral Summit held last year, on the occasion of the 20th anniversary of the framework, “Trilateral Cooperation Vision for the Next Decade” was adopted. In the last two decades, future-oriented, practical cooperation among the three countries have been developed, based on the original principle of the trilateral cooperation. In the next coming decade, the three countries shall not only continue promoting the cooperation among themselves, but also expand the cooperation beyond to the region and the world, for the future generation, in the fields each has the advantages.

The recent novel coronavirus pandemic is often expressed as the biggest crisis since the World War II. The world has been hugely affected from it, politically and economically, by the travel or trade restrictions in the effort to contain it. The three countries are facing the challenge in this difficult time, and the afterwards in mind, to consider how to further promote the trilateral cooperation as well as to contribute to the region and the rest of the world.

Based on the above stated issue interest, 4 members examines the possibilities of further enhancing the network of trilateral cooperation among Japan, China and Korea during and after the ongoing COVID-19 pandemic for the betterment of not only for the three countries but also for the region and the world.

Dr. MINAMIKAWA Takanori is Lecturer, Okayama University of Science. Prior to taking up his position, he was Part-Time Lecturer at Hokkai-Gakuen University and Sapporo Gakuin University. He was also Co-Researcher at Center for Regional Economic and Business Networks and Research Fellow of Economic Research Institute for Northeast Asia, ERINA. He received his BA from Otaru University of Commerce, and MA and Ph.D. from Graduate School of Economics and Business Administration, Hokkaido University.

Dr. Hideyuki Miura is associate professor of international relations at the Faculty of Social Sciences, Kyorin University. Prior to taking up his position, he was Senior fellow at the Global Institute for Asian Regional Integration, Waseda University and Research associate at the Asian Development Bank Institute. He was also Junior visiting research fellow at the Japan Institute of International Affairs (JIIA). His current research interests include Japanese foreign economic policy, U.S.-Japan relations, international trade policy, and Asia-Pacific economic integration. His recent work includes “the decision-making process of U.S. Trade Policy toward China in the Trump Administration” in the Journal of Asia-Pacific Studies (forthcoming). He received his BA from Sophia University, and MA and Ph.D. in international relations from Waseda University.

Mr. YATSUZUKA Masaaki is Research Fellow, China Division, Regional Studies Department, National Institute for Defense Studies. Prior to taking up his position, he was Research Fellow in Japan Society for Promotion of Science, Researcher in Consulate General of Japan in Hong Kong. He was also Deputy Director in International Policy Division, Bureau of Defense Policy, Ministry of Defense, Japan. Concurrently serving as Adjunct Lecturer in Hosei University. He received his B.A. in Faculty of Policy Management from Keio University and M.A. in Graduate School of Law, Keio University.